Actually I’m not intending to open a store or restaurant, but this was suggested by a friend,  I did like the alliteration.

Back in December I got to take my bug show to Romney Elementary— Carrie Leigh’s 5th grade.  Milly Mullins, reporter for the Hampshire Review, covered the event.  Carrie is a former colleague, and I always enjoy visiting her classroom.  And I really enjoy preaching the virtues of entomophagy to young folks.  I tell them projections for the year 2050.  I know 2050 is a lifetime (three more of THEIR lifetimes.)  But us oldsters know 2050 will be here in the blink of an eye.  A U.N. report projected the world will population will rise to 9.2 billion.  3 billion will be living in urban slums.  There will be 1/3 less “farmable” land.  And a billion will not have sufficient water.  I encourage them to begin thinking of solutions.  I do believe insects could well be part of those solutions.  Insects require drastically less feed and water input to produce the same amount of edible nutritious protein.  And insects require drastically less space to produce that same amount of  protein.

But unfortunately we may not be evolutionarily designed to be forward thinking.  This is an interesting article that argues we should promote the good taste of insects , rather than appealing to the benefits to the planet.  I would encourage you to read this article featuring Kathy Rolin of Cowboy Cricket Farms:  www.npr.org/sections/thesalt/2019/01/10/677826823/should-hyping-edible-bugs-focus-on-the-experience-instead-of-the-environment?sc=tw

Reporter Mullins voiced personal interest in entomophagy,  She had recently watched the award winning documentary , The Gateway Bug.  If you have a Hampshire County library card you can watch the documentary for free.  Ask your librarian.

Some of the pioneers in the insect protein industry generously sent some of their products.  Entomo Farms, Exo Protein, Chirps, and Merci Mercado.  Jiminy’s sent samples of their pet products.  (Humans shouldn’t be the only ones to enjoy cricket protein products.  I have mentioned previously, if you want to give insect products a try, and you’d like to give a big order price without making a big order, you might check out this local group: the Bug Co-op.  Maybe someone would split a bigger order with you.

Principal, Patty Lipps was a good sport and tried some of the bug products. The students were so attentive and polite.  I hope some of them will be the pioneering scientists and entrepreneurs to solve the many challenges of feeding the world’s population in the future. 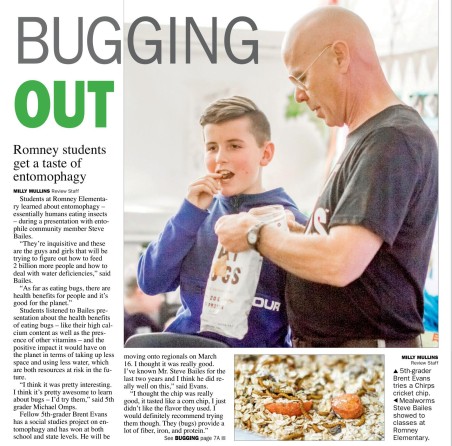